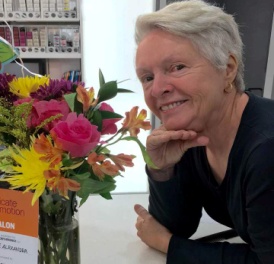 A lifelong Texan, Judy discovered and fell in love with Virginia when, in 2004, she hiked the 500 miles of the Appalachian Trail that spans the state. After retiring from the state of Texas as Director of Child Care Licensing, she traveled in her motor home for two years, visiting 41 of the 50 states.

Texas is still her primary home, but in 2007, Judy purchased a property in Grayson County, Virginia on the edge of the Mount Rogers National Recreation Area. Now the Blue Ridge Mountain hikes that she loves are right outside the door of the house she calls her “little brick box.”

The theme of her life might be described, in true Texas style, as “Don’t Fence Me In.” In matters of religion and spirituality, she saw tenets of traditional faiths as inspiring but the theology as too limiting. Yet, in 2016 Judy attended her first retreat at The Oracle Institute, and at the retreat she saw practitioners of the five major God-focused religions teach, interact, share and enrich one another as well as the participants. This was the accepting, mind-opening, wide view she had been seeking, and Judy was moved to become a life member of Oracle.

Judy can be reached at Judy@TheOracleInstitute.org