The Heroes of D-Day vs. Police Brutality 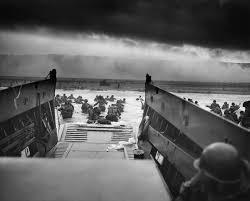 Seventy-six years ago, D-Day (June 6, 1944) marked the beginning of the liberation of Europe from fascism and genocide. Each year, people the world over remember the sacrifice and courage of the heroes who stormed the beaches and helped secure freedom for those oppressed by the Axis powers. This year, however, the timing of this day of remembrance feels almost prophetic. In the wake of the explosion of protests addressing the systemic racism and abuses within our police and justice systems, the anniversary of D-Day feels more like a call to arms than a celebration. D-Day may have led to the defeat of the Axis powers, but we have not won the war against injustice, racism, and the tendency toward fascism.

Of course, anyone who has been paying attention would know this. The list of grievances of the Black, Indigenous, LGBT+, etc. communities against our society is long and legitimate. But the juxtaposition of D-Day with the current abuses we see from our government toward its own people brings this reality into a stark focus.

What would the WWII troops being praised today have to say about the current state of our country and the abuses its citizens are suffering at the hands of those meant to serve and protect them? Surely, it gives us cause to consider what it truly means to honor their memory. It does not seem possible to do so while simultaneously justifying the brutality being witnessed nationwide.

Indeed, from where I sit, the only true way to honor their courage and sacrifice is by joining the fight against injustice ourselves. It is our job to take up the mantel of those heroes and everyone who strives (or fights) for justice and equality. The work is not yet done, and it requires all of us. Not just for the sake of their memory, but for the sake of those of us who do not yet breathe free.

We must dismantle systemic injustice and confront racism and fascism. A better world is possible. It is up to us to ensure we get there.

“Until we are all free, we are none of us free.”
- Emma Lazarus