Janmashtami: Commemorating the Birth of Krishna 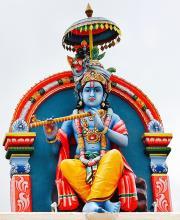 Today is Janmashtami, the annual celebration of the birth of Krishna, who is revered as one of the most important divine avatars in Hinduism. Specifically, he is an avatar of Vishnu, one of the major gods of the Hindu trinity.

According to some Indian historical sources, Krishna was a real person who was born about 3100 BCE. However, other traditions place his birth much earlier, in a distant mythological past. Different sects of Hinduism regard Krishna as either the primary manifestation of the Divine or at least as a significant spiritual figure of ancient history.

Regardless of the interpretation, understanding Krishna, his character and teachings as recorded in Hindu scriptures, is essential to understanding Hinduism. The common theme about Krishna presents him as the essence and symbol of divine love, with his beloved wife Radha and other consorts called gopis representing the female aspect. Stories of Krishna – especially of his youth – tell of a playful, enchanting, sometimes even mischievous figure, who manifests God’s desire to engage with our souls in an intimate relationship according to the concept of lila (love-play). Krishna is also protective, compassionate, and morally serious, while being joyful and regarding life as somewhat of a game.

The Bhagavad Gita presents some of Krishna’s moral and social teachings, such as the importance of doing one’s duty in life – even if one’s duty is to fight in a war for righteousness and justice against members of one’s own family who are fighting on the side of evil. As the story goes, Krishna was born in an era of chaos, oppression, and unjust government, and his own uncle, the king, attempted to murder him. In a famous dialogue, Krishna counsels the warrior Arjuna that he should go to battle to restore justice in his kingdom, despite Arjuna’s reluctance to accept the moral responsibility of opposing his own kin.

Hindus celebrate Janmashtami by fasting, singing devotional songs of love for Krishna, and keeping a vigil into the night. After midnight – when Krishna is believed to have been born – devotees wash and clothe statues of baby Krishna, which are then placed in a cradle. Then they break their fast by sharing food and sweets. Women draw tiny footprints outside their house doors and kitchen, walking towards their house, which symbolizes Krishna’s journey into their homes. Many communities organize dance-drama events called Rasa Lila or Krishna Lila, and Hindu temples recite from the Bhagavad Gita and other scriptures that tell of the life of Krishna.

On Janmashtami, both Hindus and others who respect the Hindu faith may consider the themes of Hindu beliefs about the avatar Krishna – themes of divine love, playfulness and joy, and courageously doing one’s moral duty with a spirit of acceptance of both the pleasurable and the unpleasant aspects of the great game of life.