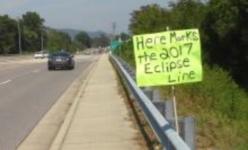 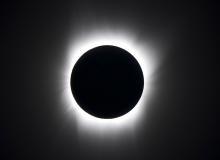 On August 21, I drove from my home in Independence, Virginia, to Spring City, Tennessee, a town located exactly on the center line of the zone of totality for the Great American Eclipse of 2017. I was prepared with a pair of NASA-approved “special glasses” to be able to look directly at the sun without damaging my eyes, and I was ready to experience an awe-inspiring sight, both as the moon slowly moved across the face of the sun and then, finally, at the moment when the sun was completely obscured and I could take off the glasses and behold with my naked eyes the inky black moon totally blocking our planet’s source of light and life.

It was an experience I will never forget. As a natural phenomenon – and also as a social and psychological phenomenon – I now understand on a personal level why total eclipses of the sun are such a big deal, and why, throughout human history, they have been a source of religious wonder, fear and trembling, and social upheaval.

I arrived in Spring City in the early afternoon, as the moon was just beginning to partially eclipse the sun, perhaps one-third of the way across the face of the brilliant orb in the sky we take for granted. I donned the special glasses, which were so dark that nothing could be seen through them except the sun and the part of it that was blacked out. It looked like somebody had taken a big bite out of an apple.

I parked my car in a large field that the town had made available for people to watch the eclipse. The atmosphere was like a festival – there were hundreds of people and cars, RVs, and even tents. As I walked around, looking at license plates and talking with fellow visitors, I realized that they had come from all across the country – especially the eastern United States, but even some from farther away locations. I decided to hang out with a group of people who had gathered under a big tent near my car, and they said they were from Georgia, Alabama, the Carolinas, Wisconsin, and even one person from Alaska! He said he was on the East Coast visiting family and decided to come to Tennessee to see the eclipse.

We all watched with our special glasses as the moon steadily ate up more and more of the sun. Fortunately, the weather was perfect, hardly a cloud in the sky. All of us were surprised at how bright the daylight still seemed, even after most of the sun was already obscured. But as it got closer and closer to totality – perhaps at least 90% eclipsed – we began to feel an eerie chill in the air, and the light took on a strange quality, like somebody turning down the contrast on a TV or computer screen. It looked like a sunny day with stark shadows, but colors seemed washed out and there was a dimness to the light that felt vaguely disturbing.

As the eclipse progressed to 95% or more, the temperature, which started out in the 90s, had dropped probably about 20 degrees – it was cool and humid, with moisture rising from the ground, and it felt like evening. The light had a truly bizarre quality, intense but dim at the same time, perhaps like how it looks on a more distant planet with a thin atmosphere.

In the final 10 or 15 minutes as the last vestiges of the sun began to wane, there was an unsettling feeling in the air, a psychological and even physiological disturbance, and I was not the only one who experienced it. Waves of nausea mixed with a primordial animal fear, the fight-or-flight response, began to wash over me. It was as if there was “a disturbance in the force.” I cannot explain why I felt this, because I understood that I was simply watching a natural phenomenon with an ordinary scientific explanation. And yet, people were turning to each other and muttering about how weird it felt. I hid my uneasiness for a while, until I realized that others were feeling the same way, and then after I began talking about it with people around me, the intensity of the weird vibe began to subside. Perhaps the social permission to acknowledge that we are animals, deeply connected with the earth and thrown off from our ordinary state of consciousness when planetary norms and cycles are violated, was a comforting factor that dampened the palpable uneasiness mixed with excitement in the air.

I can only imagine what it must have been like for ancient humans as they saw the sun darkening during a bright sunny day, the terror they must have experienced in those last few minutes leading up to a total eclipse, not knowing what was going on. Had they offended the gods? Were the great powers in the sky going to turn out the lights on our world? And then, during the few minutes of totality, the terror must have risen to a crescendo, with screaming, rending of garments, people falling on their knees in impassioned prayer for the sun to return. In some cultures, there were bloody sacrifices – even of human beings – to appease the gods so that they would allow the life-giving light to once again shine on our world.

In 2017 in Spring City, Tennessee, a roar of applause went up from the crowd as we took off our high-tech glasses at the scientifically determined moment, and took in the splendor of the moon totally obscuring the sun, with only the shimmering white corona visible as a ring of faint light around its circumference. The ambient light level fell to that of late twilight – and it dropped suddenly, almost like somebody turning off a light switch. If we thought it seemed dim before, boy was it dim now! Stars became visible in the sky. Insects began chirping according to their evening routine. And we gazed in awe and wonder at a truly spectacular sight, as though the sun had turned into a black hole.

And then, two and a half minutes later, the gods – or the mathematical equations governing the orbits of the heavenly bodies – flipped the light switch, we put our special glasses back on, and watched a thin sliver of sun reappear. Within a few minutes, cars were already streaming out of the field, trying to beat the traffic. Smart idea! I delayed leaving for another half hour or so, and the traffic driving back home was epic, a “carmageddon.” The world hadn’t ended, but some of the conveniences we take for granted had, at least temporarily. For many hours, I crawled bumper-to-bumper on I-40 and I-81, and even took some long detours on local country roads to avoid some of the worst of the traffic jams.

Before I left Spring City, while the sun was slowly in the process of returning to full luminosity, I was somewhat in a daze, still feeling like things were not normal. My cell phone had stopped working for a few minutes after the total eclipse. I had a headache and felt inexplicably tired and still a bit queasy. I stopped at a convenience store to buy a drink, and the man behind the counter asked me where I was from. He said that people had stopped in his store that day who came from all over the place, even from foreign countries. I sat outside in the sun for a few more minutes, and the sunlight grew a little bit warmer. It was starting to feel like summertime in Tennessee again. The world was returning to normal.

We don’t usually think about how dependent we are on the normalcy of natural phenomena in our world – the predictable rising and setting of the sun and the moon, the ebb and flow of the tides, the cycles of the seasons, and so on. But we are more connected to these things than we realize. We are animals. When nature does something out of the ordinary, we can marvel at it, but we can also feel unsettled by it. Modern science, with its ability to predict such things as eclipses – and increasingly even severe weather events such as hurricanes, tornadoes, and blizzards – can take the edge off the fear that ancient people would have experienced from seemingly inexplicable natural phenomena. But even today, we are weirded out by such things. We feel excitement, mixed with echoes of the human past, the pre-scientific minds of our ancestors and the animal parts of our brains that react rather than reason.

Extreme natural phenomena remind us of aspects of who we are. And they bring us together in spontaneous human connection – whether in a temporary tent city in Tennessee or in hundreds of miles of bumper-to-bumper traffic flowing away from a “zone of totality” or a hurricane evacuation zone. In our ordinary day-to-day lives, the sun shines normally, the wind blows moderately, our cell phones work, and our cars can get us where we want to go at high speed. The Great American Eclipse of 2017 was a good reminder that the universe is much bigger than our everyday lives, and that even with all our modern science and technology, we remain extraordinarily dependent on something as simple as a steady light in the sky. We are creatures of the earth, relying on the sun like all other life in this world. When it goes away, even for two and a half minutes, we rightly notice and wonder.