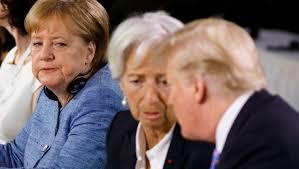 Back in March, Politico Magazine and other news outlets ran the headline: The Leader of the Free World Meets Donald Trump. It was a shock to hear German Chancellor Angela Merkel now referred to as the “Leader of the Free World.” Yet, the more I thought about it, the more I realized this observation is correct. On this Memorial Day, our collective dereliction of duty in electing Donald Trump (or failing to vote) strikes me as just plain un-American.

Clearly, the United States has forfeited the global mantel of moral and intellectual leadership. The fact that Trump lacked even the basic civility to shake hands with Chancellor Merkel is a national embarrassment. With our international reputation already in shreds, I awoke this morning to more headlines marking the descent of American global influence. How does this headline grab you: The Free World Can No Longer Count on the United States?

Once again, President Trump and Chancellor Merkel are at the center of the story. And once again, Trump has embarrassed himself and America with his ignorance of international affairs, the growing evidence of espionage crimes, and his quintessential ugly-American behavior. Thankfully, Merkel stands as a steadfast and trustworthy leader, speaking for the 7 democratic nations which met at the G-7 economic summit in Italy, the 28 NATO countries that met in Belgium, and for Americans like me who cannot tolerate the daily damage done by Trump.

This time, Trump insulted ALL of our allies, by casting NATO as a business deal rather than a sacred and solemn Treaty, and by threatening to disavow the Paris Climate Accord that just might save our planet from further unalterable affects of Global Warming. Other cringe-worthy and horrific headlines that broke during Trump’s trip abroad include:

So on Memorial Day 2017, allow me to express some of my military concerns for our nation:

As the great-granddaughter of Horatio Shrewsbury George, member of the Highland Cameron Guard who died during World War I: I am disturbed by Trump’s casual decision over dinner with Prince Jared and Steve Bannon to drop the “Mother of all Bombs” on Afghanistan without input from the Pentagon.

As the granddaughter of Leslie Cameron George, World War II veteran who helped evacuate victims in German Concentration Camps at the war’s end: I am astonished at how quickly Germany became an honored member of our global community and unofficial leader of NATO, and I am shocked at how quickly our own reputation has been shattered.

As the daughter of Naval Academy graduate and Vietnam veteran James Leslie George, who was Director of the Arms Control and Disarmament Agency under President Ronald Reagan: I am concerned that Trump may manufacture a military crisis to divert attention from the Russia investigation and prolong his reign of power (e.g., escalate the stalemate with North Korea).

And as a former attorney, interfaith minister, and director of the Peace Pentagon: I have seen enough in the first five months of the Trump presidency to conclude that he is unfit for office and should be removed via impeachment proceedings (if treason or another crime is proven), or via the incompetence/disability process provided in Section 4 of the Twenty-Fifth Amendment to the United States Constitution.

And now I am going outside to memorialize Memorial Day by planting fruit trees with Mimi, who has been sharing her concerns at our Facebook pages since the start of the Trump tragedy: