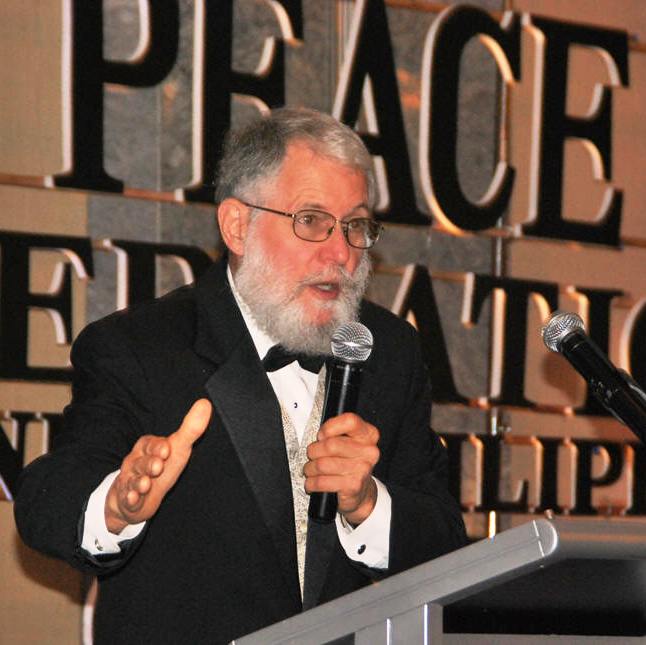 IPPNO has Peace Messenger status with the UN and under Dr. Martin’s leadership has contributed actively to such UN related accomplishments as the 1996 World Court decision that substantially all use and threat of nuclear weapons is illegal according to international law, the International Peace Bureau’s successful campaign to curb French nuclear tests, the Abolition 2000 Caucus toward the total abolition of nuclear weapons, and the Millennium Forum conference on the future of humanity. Under his guidance, the IPPNO Document on World Peace was developed over a period of several years and was published by IPPNO in the year 2001.

Since long before receiving his Ph.D. in philosophy from the Graduate Center of the City University of New York and his MA from Hunter College, he was a conscientious objector to war and active in movements for peace and the transformation of our brutal and violent world order. Much of his writing and scholarship has centered around the interconnections between the spiritual and social-political dimensions of achieving peace and human liberation.

For a number of years Dr. Martin has been active in the movement to create non-military, democratic world government under the Constitution for the Federation of Earth. Since 1997, he has been a member of the World Executive Council of the World Constitution and Parliament Association (WCPA) which coordinates a network of people from 120 countries worldwide in their work toward these goals. At the Provisional World Parliament in Chennai, India, December 2003, he was nominated and confirmed as Secretary-General of WCPA. In 2012, he became President.

ECI is a think tank directed toward global issues and their solution. In May and June 2002, he was professor in Graduate School of World Problems seminars being held in Takoradi, Ghana and Lucknow, India. The Graduate School was renamed the Institute on World Problems (IOWP) in 2003. He taught in seminars on world problems for IOWP in Kara, Togo (2003), Kolkata, India and Kameoka, Japan (2005), in Tepotlzan, Mexico and Kalamata, Greece (2007), in Colombo, Sri Lanka and Lucknow, India (2008), and in San Jose, Costa Rica (2010). In 2011 and 2012, he similarly gave lectures and workshops in a number of countries. He is currently President of ECI.

Dr. Martin is a regular contributor of political editorials to various newspapers, newsletters, and web journals. Dr. Martin has received world peace awards from several international organizations and, in 2002, he was nominated for the prestigious Mahatma Gandhi International Peace Prize awarded annually since 1995 by the government of India. He was voted as Press Action Hero of the Year in 2003 for one of his political editorials. In 2007, he received the World Peace Leader Award from the Office of the World Peace Envoy in Thailand. In 2013, he was awarded the International Gusi Peace Prize, which is conferred in person each November in the Philippines.

He has also published widely in the service of world peace and a transformed future for humankind. He authored From Nietzsche to Wittgenstein - The Problem of Truth and Nihilism in the Modern World (1989), and Millennium Dawn - The Philosophy of Planetary Crisis and Human Liberation (2005). He continues to publish many articles and reviews on a variety of topics in comparative philosophy, the spirituality of human liberation, economic democracy, democratic world government and global social issues.

He is also author of the booklet Century-twenty-one: Crossroads for Humanity - The Manifesto of the Earth Federation (that was ratified at the Seventh Provisional World Parliament in December 2003 as the official manifesto of the Earth Federation), editor of World Revolution Through World Law - Basic Documents of the Emerging Earth Federation (2005), and co-editor of Emerging World Law (2010). His fourth book on a transformed future for humankind was Ascent to Freedom: Practical and Philosophical Foundations of Democratic World Law (2008). It examines the rational and moral grounding for democratic world law under the Constitution for the Federation of Earth.

Martin's fifth book is called Triumph of Civilization: Democracy, Nonviolence, and the Piloting of Spaceship Earth (2010). It studies the deep violence of our current world order and shows the ways in which authentic democracy can transform the world to one of sustainability, justice, peace, and nonviolence.  He has also published A Constitution for the Federation of Earth: With Historical Introduction, Commentary, and Conclusion (2010) which focuses on the Earth Constitution in its historical, conceptual, and planetary contexts.

In 2011, his seventh book appeared entitled The Earth Federation Movement: Founding a Social Contract for the People of Earth. This book lays out the history and principles behind the Earth Federation Movement and includes documents to illustration the principles. In June of 2011, Martin did a lecture tour that included Lucknow, India, Colombo, Sri Lanka, Chennai, India, Dhaka Bangladesh, and Bangalore, India. In July, he led a seminar on the Earth Constitution in the Adirondack Mountains of New York State.

In Chennai, Martin received the "Lighthouse of the World Award" for his work for world peace, awarded by WCPA (Asia Wing) and Bharat Vikas Parishad on the occasion of the "Global Challenges to Peace" Program, Pondicherry and Tamil Nadu, India in June 2011. In January 2012, he left the office of Secretary-General of WCPA and was elected as its President. In 2016, he published One World Renaissance: Holistic Planetary Transformation through a Global Social Contract and in 2018 Global Democracy and Human and Human Self-Transcendence: The Power of the Future for Planetary Transformation. The latter book explores the role of the Earth Constitution through many dimensions of human self-transcendence.

Martin's newest book was published by Oracle Institute Press in 2021.  It is entitled The Earth Constitution Solution: Design for a Living Planet. This book shows in detail what a sustainable world would need to look like and how the Earth Constitution provides exactly the institutional structures that are needed.