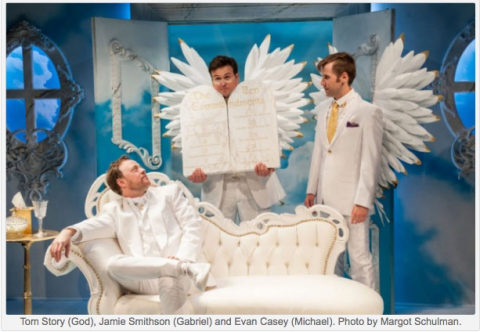 There’s a play called “An Act of God” which currently is running at Signature Theater in Washington, D.C. It is the work of David Javerbaum, winner of 13 Emmy awards and former head writer and producer of The Daily Show with Jon Stewart. In the play, God speaks with Archangels Michael and Gabriel about the state of our planet, and he is not happy with humans. He therefore issues Ten “New” Commandments, in the hope of setting us on the correct path.

I no longer live in the D.C. area so have not seen this play – having moved to the Appalachian Mountains of Virginia seven years ago to expand The Oracle Institute school and publishing house, build the Peace Pentagon, and start the Valley of Light micro-community – all geared toward ushering in a new paradigm based on compassion and a culture of peace. From the play’s reviews, however, I have gleaned that God is horrified with Trumpism, as it violates many of the New Commandments.

For example, the New 3rd Commandment states: Thou shalt not kill in My name. And the New 4th Commandment reads: Thou Shalt Separate Me and State. In both instances, God is frustrated with those who claim to speak for him, especially in matters of war, government, and nationalism. Indeed, even our errant President George Bush II gets this point, as he warned that Trumpism has distorted nationalism. See also my blog on the Nazis in Charlottesville for a discussion on where nationalism/nativism falls on the Spectrum of Consciousness.

And then there’s Bill O’Reilly, who publically decried that he is mad at God for not protecting him from the bad press and millions of dollars spent to settle sexual harassment claims. Once again, God has responded to O’Reilly (through Stephen Colbert’s portal to God), to let us know that our free will has run amuck and that we need a spiritual reset.

Regarding our much-needed spiritual reset, perhaps now would be good time to quote the New 9th Commandment in “Act of God”: Thou shalt not believe in Me because your faith will not be rewarded. In other words, it’s the 11th Commandment brought to us by Jesus (identified as such in the first book of the Oracle foundational trilogy, The Truth: About the Five Primary Religions) which matters most:

Do to others what you want them to do to you.
This is the meaning of the Law of Moses and the teaching of the Prophets.
(Matthew 7:12; Luke 6:31)