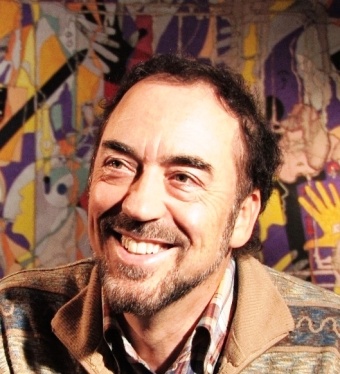 Oberto “Falco” Airaudi, the founder and inspiration of The Federation of Damanhur, passed away on Sunday, June 23, 2013 at 11:12 pm, in the nucleo community of Aval, where he had lived with other Damanhurian citizens since 1980. Falco was 63 years old.

In a March article in Qdq, the Damanhur daily newspaper, Falco alluded to the fact that his health was failing. He invited Damanhurians to gather tightly around their ideals of friendship and affection, which he said are goals to achieve collectively. The intensity with which he lived his final days – never missing an opportunity for humor and devoting all his energy toward increasing awareness and unity between people – is an example for us all.

Over the past couple months, Falco’s condition deteriorated rapidly, but he continued to carry out his commitments, including two weekly public gatherings, courses, and individual meetings with Damanhur citizens. He also tended to his business responsibilities, signing a publishing contract with The Oracle Institute for the Initiate Trilogy just one week before his death. Falco left all his property to Damanhur because, as he often said, “I arrived on this planet naked, and that is how I will leave it.”

In his last messages, Falco urged Damanhur citizens to follow his example and continue to contribute to the achievement of a shared dream: Damanhur. He hoped work would continue in the Temples of Humankind. As he reiterated many times over the years, spiritual growth manifests when you consistently and concretely support that which you believe in and in which you value. As always, Falco stressed ACTION!

Falco was born in May of 1950 in Balangero, Italy, about forty kilometers away from the place where he founded Damanhur. He writes about his childhood and his awakening of consciousness in his last book, Stories of an Alchemist.

His mother Dovilia, who lives in Damanhur, tells about how Falco was a lively child with unusual interests. He had an endless desire to explore, understand, discover and communicate. As an adolescent, Falco began to develop a strong sensitivity and the ability to heal the pain of others.

As a young man, Falco attended a teachers college. During that time, he published his first two books: Poesie dei miei sedici anni (Poems From When I Was Sixteen) and Cronache del mio suicidio (Story of My Suicide). He also worked as an insurance agent. It was during this stage of his life that he married for the first time and fathered two children, Valeria and Adriano. After a divorce, Falco married Sirena Ninfea, his life partner of thirty years. He also has a daughter named Laene with Cicogna Giungo, with whom he had been in relationship since 1984. Falco also is survived by grandchildren.

In the 1970s, Falco intensified his research activities with groups in Turin and the surrounding provinces. In particular, he developed the ability to heal, gradually making pranatherapy his main activity. In 1975, after giving the insurance agency to his employees, he founded the Horus Center for Parapsychological and Esoteric Research in Turin with friends who were soon to become the first Damanhurians.

From then on, Falco’s history is closely intertwined with that of Damanhur: the acquisition of the first land in 1977, the inauguration of the first nucleo community in 1979, the growth of the phenomenon that is Damanhur, the opening of the underground Temples of Humankind in 1992 (they had been built in secret since 1978), the international activities that Damanhur has been involved with since 2000.

Falco was the inspiration behind and animator of the Damanhur accomplishments, even though since 1989 he no longer held any official roles or possessed any official power within the Federation. Until his passing, however, Falco remained a fundamental reference point for the community, a volcano constantly in motion, erupting with brilliant ideas.

Falco also is known for introducing Selfica, the art of making objects based on the precise relationship between form and material which can catalyze and direct energies to their users. He also created Selfic paintings, which can be found worldwide in private collections and were featured in solo exhibitions in many cities, including Moscow, London, Tokyo, Berlin, and San Francisco. Falco also wrote extensively, publishing thirty books, most of which have been translated. He used the proceeds of these activities to support the objectives of Damanhur.

In private, he was shy and reserved. For Damanhurians, he was a traveling companion on a mystical quest who knew the way, a spiritual father who was often demanding and just as often available and supportive. He was a medium, a philosopher, and a teacher, able to mediate communications hidden in the folds of the Universe. He repeatedly emphasized that everyone is responsible for his or her own choices. And he conveyed all his teachings with a sense of humor, as he constantly reminded us that in order to achieve important goals, it also is important to see the humorous side of life.

Falco’s spiritual vision greatly emphasized action and the realization of practical goals. He often said that the reawakening of our inner Divinity – which he insisted dwells within every individual – is the manner by which we connect to the Soul of the Universe. Indeed, the spiritual path he created, called the School of Meditation, is based on dialog with others, on seeking communication with the forces that populate the Universe, and on the development of personal sensitivity. This path is well-explained in the Initiate Trilogy, which Falco wrote for the Damanhur Mystery School and which recently has been translated into English and published by Oracle Institute Press. The Three Books of the Initiate contain Forewords from Laura George (founder of The Oracle Institute), Alex and Allyson Grey (founders of the Chapel of Sacred Mirrors), and Barbara Marx Hubbard (founder of The Foundation for Conscious Evolution), respectively.

Falco will live on, in his books, his artwork, in the Damanhur scared spaces, and within those who had the privilege to meet him in person. He provides a vigorous and imaginative model of how to live a spiritual adventure without succumbing to the temptation of creating yet another layer of religious dogma and rigidity. Thus, the best way to salute Falco is to continue building the dream of a better world … which is what Oracle hopes to build with its “Valley of Light” project.

“There are many other adventures to be had,” Falco said recently.