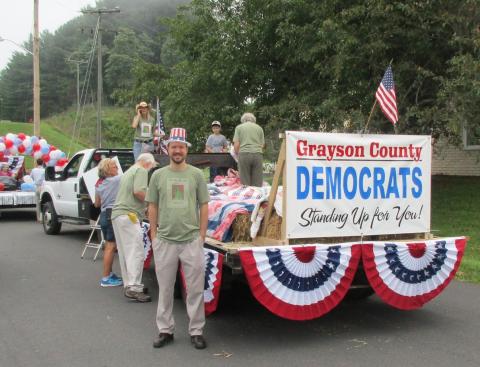 Independence Day is a big deal in the small town of Independence, Virginia – as you might imagine, from the name of the town and its location in one of the most important states in the American Revolution.

We’re deep in Appalachian Trump country, and boy is it red down here. But progressives are more fired up than we’ve been in years. Attendance at meetings of the Grayson County Democrats, of which I am Chairman, is three times what it was a year ago. Our float in the 4th of July parade this year won 3rd place, and one of local our elected officials dressed up as Lady Liberty and carried the torch of an inclusive, welcoming and compassionate society.

It’s easy to get discouraged about the state of democracy in America today. We have a sociopathic clown occupying the Oval Office, like something out of the movie Idiocracy, only 500 years ahead of schedule. But nobody ever said democracy is easy. We have “A republic, if you can keep it,” as Benjamin Franklin said. Damn right.

Ordinary people with good values have to get involved as activists and public servants, or else extraordinarily vile, crazy, corrupt people will be the only ones running the government – whatever’s left of it.

I don’t know how long it will take for the sane, the sensible, the more mature and enlightened among our citizenry to take back America, drain the swamp and make America great again. It might be a long hard road back to where we were just a few short months ago – the state of higher civilization we enjoyed when a President of the United States focused on doing his job rather than making the kind of vulgar and violent tweets that would get a third grader expelled from school. Rome wasn’t built in a day, but it sure can fall quickly.

But I believe America is a great nation and a great people – or we can be, when we try. As a patriotic American, I want to live in a nation that is great because it’s good:

In the spirit of Independence Day, let’s declare our independence from small thinking and embrace these great American values – a revolution of the heart, mind, and human spirit, of which our nation’s founders would be proud.

Donald Trump is just one man, and although he may embody the worst of our national character, he will not be in the White House forever. The business of living, loving, and building our communities and our country must go on. It’s up to us to make America great again, despite the best efforts of a barbaric president to distract us from our civic duties and the better angels of our nature.