My Mother Was a Refugee 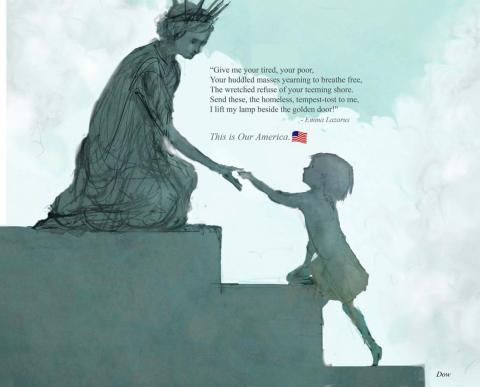 As this year's 4th of July approaches, thousands of migrant children whose families were seeking asylum in the United States are imprisoned in internment camps, having been abducted and separated from their parents by the Trump administration. Many of them are little kids, even babies.

This Independence Day, for the first time, I feel called to kneel in prayer and shame upon seeing the flag or hearing the national anthem, and am reluctant to stand in proud celebration of the greatness of America.

I haven't written about politics in a long time. My life has been busy, and what time I have had for political activity has been doing the routine business of serving as a Democratic county chair in a very Republican area. But things are becoming less and less routine in America today. The Trump administration is crossing too many lines, violating too many norms of honest and decent governance. So I feel a need to write something, if for no other reason than to go on the record about where I stand.

I'm for immigration reform. Let's have legal guest worker programs for millions of people, with a path to earn citizenship. Let's have better border security, by all means, but let's also be decent human beings in the process. Let's not be a country that does things reminiscent of Nazi Germany.

This issue is personal to me, because my mother was a refugee. She grew up in Czechoslovakia, where her father started a small business as a restaurant owner. During World War II, he was conscripted into a forced labor camp by the Nazis. After the Communists took over, his business was taken away from him, and all of his money confiscated, by government agents who beat him up and knocked out all his teeth. Not surprisingly, my mother decided she wanted to get out of that country.

When the Soviet Union invaded Czechoslovakia in 1968, my mother was working a summer job in England. She had been fortunate to have that opportunity because of more liberal policies about travel to the West under the reformist president Alexander Dubcek. His reform movement, called the “Prague Spring,” was crushed by Soviet tanks rolling through the streets of Prague. My mother decided to seek asylum as a refugee in the U.K. She was turned down, and fled to West Germany, where they did accept her into their country. There, she met my father, an American who was studying abroad.

My mother's story is just one variation of a theme that has inspired most immigration throughout history: Conditions in your home country are terrible, so you take the risk of fleeing to another country you think is better. America has been the destination of millions of immigrants from all over the world, who have come here with hope to build for themselves a better life. Another branch of my family were poor Irish immigrants in the 1800s. Nearly everyone in this country can point to someone in their family tree who was a refugee, fleeing desperate poverty or persecution in their country of origin.

Today, most of our immigrants are coming from Latin America instead of Europe. Their motivations for coming here are the same. The conditions where they come from are terrible, and they want a chance for a better life. They come with a willingness to work hard for low pay in unpleasant jobs — just like so many of our immigrant ancestors did — and they enter this country with hope in their hearts and a love for what they have heard about the values and opportunities to be found in the United States.

But today, many of them are finding that our values are different than what they hoped for — that our country has become a harsh and unwelcoming place. And they find that instead of the opportunity of a better life, they are put in prison just for asking to enter the country. Some of them have even had their little children kidnapped by the U.S. government.

I'm glad my mother didn't have that experience. I'm glad I'm not one of those kids being held within chain-link fences inside abandoned big-box stores, for who knows how long, separated from my parents by an unnecessary and cruel government policy.

If the American people want less immigration, there are more honorable ways to produce that outcome. Maybe even build a wall. We can start by tearing down the Statue of Liberty and using the rubble.

Whatever we do now, it will define the image of America in the eyes of the world for a new generation. Will we remain the "shining city on a hill," or will we become the same type of country that people are fleeing from?

That's up to President Trump and the Republican Congress, who hold total power over the U.S. federal government. I suggest they check their souls, consult their Bibles ("welcome the stranger") and the words of conservative hero Ronald Reagan ("open the border"), and stop ruining the reputation of this nation of immigrants whose greatness they profess to wish to restore.