Nazis at THE University! WaHooWhat? 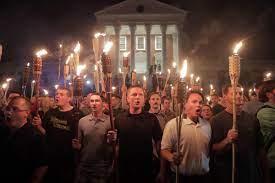 As a proud alumna of the University of Virginia, I watched with horror as White Supremacists amassed at Mr. Jefferson’s Rotunda, commencing a week of sheer horror both in Charlottesville and around the world. And as the Executive Director of The Oracle Institute, a socio-spiritual think tank, I watched this week’s events with a trained eye, recognizing the destructive and dogmatic persistence of this American cultural meme.

Using the language of Spiral Dynamics, approximately 30% of our country still operates at the Level 3 (ego-centric) and Level 4 (ethno-centric)stages of development. Such people primarily are motivated by mythic sentiments (e.g., glorifying the Civil War) and nationalistic bigotry (e.g., immigrants are the enemy). Not surprisingly, their numbers correlate almost exactly with the percentage of Americans who still support President Trump, who ironically colluded with a real enemy – Russia – and likely laundered money for Russian oligarchs.

For those waiting for Trump’s supporters to shift their perspective … don’t hold your breath. Religiosity in America is another strong predictor of social and political trends. A recent Pew Report showed that while more people are self-identifying as “none” when asked about their religious affiliation, the number of Evangelical Christians has remained relatively stagnant – holding at just over 25% of our country.

Oracle’s mission statement is Thomas Jefferson’s Act for Religious Freedom. We chose this poignant and powerful statement after 9/11, when Oracle was formed to promote multi-faith understanding and protect human rights. Today, we stand committed to educating the public about the dangers of religious intolerance and racism. We also are building the Peace Pentagon – a testament to the nascent pluralistic vision of our Virginia forefathers: George Washington, Thomas Jefferson, and James Madison. We invite you to visit the Oracle Campus in Independence, Virginia, where we endorse progressive political values and actively engage in sacred activism.

In stark contrast to the compassionate and collaborative values we hold dear, stand the protesters of last week. When asked why the KKK and Neo-Nazis were protesting, David Duke shared a pessimistic vision of our future: “We’re talking about the ethnic cleansing of America and the destruction of the American way of life and a new Bolshevik style society with no freedom, no freedom of speech in this country.” Translation: He is afraid of the future.

Even more revealing were statements made by Christopher Cantwell, a White Nationalist Speaker for Unite the Right:

I’d say it was worth it. …The fact that nobody on our side died, I’d go ahead and call that points for us. The fact that none of our people killed anybody unjustly, I think is a plus for us. … We showed our rivals that we won’t be cowed.” And when asked about future rallies, Cantwell stated: “I’d say it’s going to be really tough to top, but we’re up to the challenge. … I think a lot more people are going to die here before we’re done here. … People die violent deaths all the time. This is part of the reason we want an ethno-state. … We want a homeland.

Fun footnote: Cantwell was filmed crying just days after this rally when he thought he might be arrested, and he is shown shooting the American flag in a 2014 Stephen Colbert show.

For those of us who experience life from a Second Tier Consciousness, let us continue to hold our bigoted brothers and sisters accountable for their hate-filled words and immoral conduct. And as for Trump (and his father), who actively engage(d) in KKK and Fascist ideology, let us do more than pray for impeachment. Let us engage in ongoing sacred activism to set the correct course for the future of our nation and our world.