One Instance of Accountability 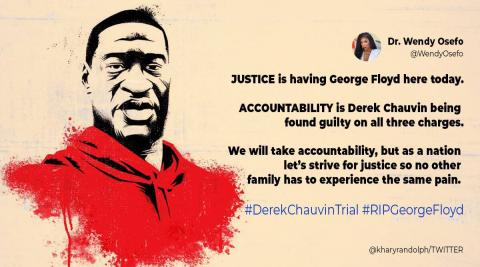 Yesterday my family and I breathed a sigh of relief as Derek Chauvin was found guilty on each of the counts facing him after murdering George Floyd. This morning, I awoke to learn of a sixteen-year-old Black honor student being killed by the police roughly thirty minutes before the Chauvin verdict was read. I can’t help but wonder if the officer responsible for her death will be held accountable. Such is a stark reminder that one instance of accountability doesn’t magically fix an entire broken system.

This is a system that is so broken that many of us were talking about how nauseous and uneasy we were as we waited for the verdict to be made public. We felt that even though the whole world saw this murder with their own eyes (thanks to the dedication of 17-year-old Darnella Frazier), Chauvin being found guilty felt overwhelmingly unlikely to happen. A system so broken that it wasn’t a given that the right thing would be done, and many of us felt actual surprise over what should have been an obvious conclusion.

As glad as I am that the right call was made in this case, I am infuriated that we live in a society in which there is any doubt that the right call would be made. I am infuriated that it has taken so long, that so many before now have been denied seeing those responsible for the deaths of their loved ones face meaningful consequences or accountability. I am infuriated over and exhausted by the number of lives STILL being taken day after day. And I know what I feel isn’t even a fraction of what our Black and Brown brothers and sisters endure.

It’s hard to celebrate the victories - even a victory as monumental as a jury finally standing up in a court of law to affirm that Black Lives Matter - when so much injustice is still piling up around us. And it’s harder still to celebrate when I end up wondering and worrying whether this will set a new standard – or, if it will be the rare exception to law enforcement not being held accountable for the taking of Black lives.

Whichever it ends up being, the system still needs fixing. It still needs our voices and hands pushing for better. We can’t grow complacent in the face of one victory. We can take a moment to celebrate, as hard as that is to do, and then we must get back to work. Most immediately, we can contact our representatives to let them know we MUST pass the George Floyd Justice in Policing Act.

And if you find yourself wanting to do more than that, let me know by contacting me at Katie@ThePeacePentagon.net. Together, we can work to push the arc of history toward a future of justice.