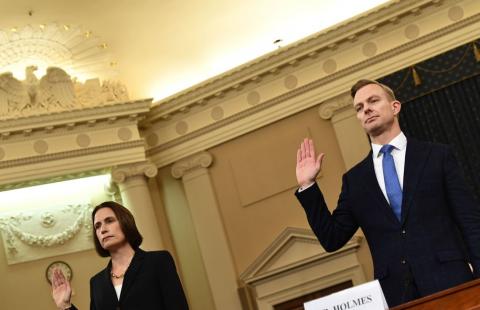 As I have watched the impeachment hearings, I have been struck by two thoughts: (1) How proud I am of my country, that we have such fine public servants both in Congress and in the career civil service, seeking to do their jobs with integrity, to protect our nation and the world from the dangers of corrupt demagogues in power. (2) How ashamed and alarmed I am that one of the two major political parties of our country has seemingly been completely captured by such a demagogue.

It should be obvious to everyone by now that what President Trump has done is not only wrong, but corrupt to a degree that transcends the relatively minor offenses of Richard Nixon, for which he was forced to resign. Trump withheld hundreds of millions of dollars of congressionally appropriated military aid from a foreign ally (Ukraine) whose territory has been literally invaded by a mutual geopolitical foe (Russia), and used those funds as a bargaining chip in seeking to get dirt on his most likely political opponent in the 2020 election (Biden). Only when a whistleblower revealed the scandal and Congress opened an investigation was the military aid released.

Trump was caught in the act of bribery, an impeachable offense specifically mentioned in the Constitution. The bribery didn’t succeed only because he was caught just in the nick of time. If he is not impeached and removed from office, we can expect more such corrupt actions to occur in the future — and maybe next time, the president won’t be caught. In fact, maybe this kind of presidential corruption will come to be viewed as normal. And if so, American politics will become an arena of no-holds-barred struggle for unchecked power between hate-filled, revenge-fueled political tribes such as leads to failed states and civil wars.

America is going through an existential struggle to find out whether we, as a people, believe that the office of the President of the United States should be subject to basic legal and ethical standards. One party says yes, and demands accountability for wrongdoing; the other party says no, and insists, despite all the evidence as well as basic common sense, that Trump did nothing wrong.

I’m at the point where I just want to believe in America again. Right now, I don’t care so much about liberal versus conservative, or whatever cultural divides or policy issues that people argue about. What I care about is that we can have a country where blatant corruption by those in power doesn’t go unpunished — a country where the rule of law reigns, and no one is above the law.

If we lose that, we can forget about our favorite political issues, whatever they may be. If our country normalizes the kind of corruption that Trump has exhibited, and which the Republican Party today is monolithically defending, the America we all used to know and love will come to an end. The Constitution might as well be used as toilet paper, for all that it would be worth. Future presidents will feel free to do whatever they want, using the office of the presidency for their own personal and political gain, without regard for the Congressional power of the purse or the integrity of elections.

As we face the existential reckoning that looms before us, I would urge that all good Americans focus on one thing above all else: Doing what is right, on a very basic level that even a child can understand. Americans can and will continue to argue about policies of health care, taxes, social issues, and so much more. But we should not have to argue about something as simple as: Let’s have a president who is not a crook.

So I commend the courageous public servants who are pressing the seminal issue of the day, and I will embrace any fellow American — regardless of party or policy differences — who decides that what really matters, more than anything else, is to stand for the rule of law and for ethics in government.

We might not win this battle, but it is essential that we see it for the turning point that it is. If we lose on impeachment, because Republicans decide to put party over country and accept the blatant corruption at the highest levels without repercussion, we must then take the fight to the 2020 election, which should be framed as a referendum on presidential corruption. If we lose that election too, as we might, we must go on fighting to restore America to become a country where law and ethics prevail.

No matter what happens, we must keep doing what is right, and let the chips fall where they may. There is no other way to save the country, and the world, from falling into darkness. We must not be distracted by polls or by politics, and we must not give up. The core principles of our system of government — and our nation’s role as a beacon of hope in a world filled with tyrants — is at stake, perhaps once and for all. As Benjamin Franklin said prophetically, it’s “a republic, if you can keep it.”