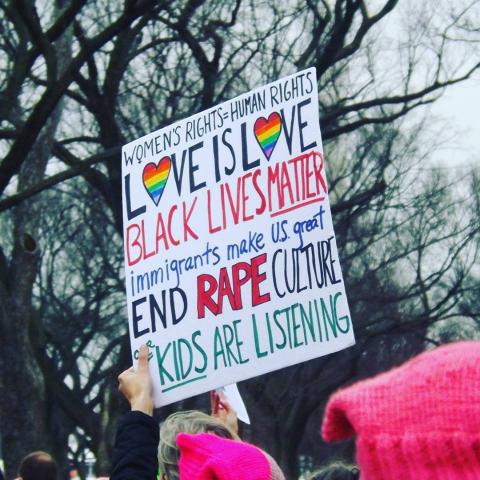 Like many of my fellow Americans, I proudly and excitedly cast my vote on November 8th only to find myself watching the election returns in horror. As state after state was announced, my excitement melted more and more into despair. I was stunned, stupefied by the unfathomable reality unfolding before me …

Here was a candidate who had run his entire campaign on misogynist, racist, xenophobic, and divisive sentiments, whose entire rhetoric violates everything that I love about America and contradicts the spirit in which this great country was founded, built, and has come to encompass as we have grown into a fuller expression of equality. Yet somehow my news feed was filled with people thanking Jesus for allowing this candidate to win, which only further fed my confusion. You see, I know Jesus, too. Not only was I raised in a Christian family and very actively involved in my local congregation from a young age, I am still a proud and devoted follower of what I believe he taught. But the Jesus I saw praised – one that could be responsible for the selection of such a man – seems so different from the Jesus I know, who appealed to the dignity and worth of every person and charged us with the responsibility of caring and providing for the sick, poor, and marginalized among us. Were we looking at the same candidate, the same Jesus? It became hard to believe that we were.

Day after day passed, and the world as I had known it continued to crumble before my eyes as racial and religiously motivated incidents broke out across the country – people, it seemed, found themselves emboldened by the sentiments their candidate expressed and the mentality he played into during his campaign, and saw those sentiments justified by his win. In the weeks following the election women were sexually assaulted, People of Color threatened, and Muslims harassed, as though Trump’s election represented some sort of social stamp of approval on racism, sexism, religious intolerance, and the like.

Then news of his appointments began rolling in, and each selection appeared to be set up to undermine the office for which he or she was nominated. The frustration and hopelessness that had been festering within me had grown into a full-fledged panic.

Needless to say, I was dreading Inauguration Day. It loomed overhead, growing nearer and nearer, the inevitability of this new administration pressing down on me, a nightmare I couldn’t escape. Being able to concentrate on my plans to travel to D.C. to participate in the Women’s March was a welcome distraction. It gave me something positive to focus on, a way to harness all the energy I had been feeling about the election and what a Trump administration means for the many Americans who have found themselves afraid for their health, their safety, even quite possibly their lives. I felt empowered, even as we listened to Trump take the oath of office and address the country for the first time as its President, knowing that we were on our way to join with our sisters (and brothers) to reclaim our voices and assert our place in the political process. We had allowed ourselves time to mourn, to lick our wounds, and to fully feel the fear and despondency of what the future holds in store. But the time to grieve was over. We were flocking to action, responding to the call to stand for liberty and justice, equality and diversity.

Despite the two months of preparation that went into the event and all the visibility this movement had leading up to the day, people are still asking “what were they even marching for?” “What did they expect to achieve?” I have seen representatives and public voices attempt to dismiss the marches as mere temper tantrums, or choosing to oversimplify the point, as though millions of people were out on a Saturday morning because we want pedicures and manicures or just because we all want to “kill our babies.”

The official statements about the reasoning and intention behind the march can be found at the Women’s March website. My personal reasons for marching are as follows:

I saw the march as a way for women (and men) of all shapes, shades, and types to gather in solidarity to show our support for People of Color, LGBTQIA, immigrants, Muslims, Native Americans, those with disabilities or health concerns, women, and all the others who found themselves marginalized by Trump’s rhetoric and to speak out about issues like health care, climate change and environmental justice, and the Freedom of the Press. For me, as I’m sure for many, the march was about expressing our commitment to advocate for the rights and freedoms of ALL people as this administration moves forward and to stay engaged in the political process. It was our way of showing, in numbers that cannot be ignored, that we are going to do our civic duty, that we take seriously our role in this society and our responsibility as citizens to be politically informed and active. We were telling the world that we're here, we're watching, and we are going to hold this administration and this Congress accountable every step of the way.

“The election is over, you lost, get over it,” they tell us. But our role in the democratic process does not end when the election results are counted. Trump is not sitting king for the next four years. The President of the United States is a public servant; his role is to serve - and not just the people who voted for him. He's now accountable to all Americans, even the ones protesting his policies. So it's not "shut up and put up" until the next election, as we have been told to do. Voting is just a part of our responsibility as citizens. We have a Constitutional right and a civic duty to be involved in the entire political process, which means contacting our representatives, organizing, protesting, and so on and so forth. And the march was our way of standing together and saying that we are going to do just that, that we are going to stand up and speak out for the rights of all and oppose any attempts to violate the spirit in which this country was founded. As many are reporting, the march was just the beginning of a movement. It was the opening act of the next four years of political activism and resistance. And it was a way to remind ourselves that we are not alone as we plant our feet firmly to stand against social, economic, and environmental injustice. Not only are we not alone, we are the majority. Together we can ensure that the America we love lives on for our future generations.

My personal motivations for marching can be compared to the sentiments of Sir Patrick Stewart, who said: "People won't listen to you or take you seriously unless you're an old white man, and since I'm an old white man I'm going to use that to help the people who need it."

I might not be an old white man, but I do recognize that my identity as a cisgender, straight, white, woman is (wrongly) afforded more privilege than others are and that my voice is (also wrongly) heard more readily than those of other identities. Because of that knowledge, I commit myself to using my privilege and my voice to advocate and to make space for those who might not feel safe enough to do so for themselves, or who might speak but find that their voices are not as readily heard. I do this because I do believe in an America for all Americans, where freedom, liberty, and justice truly are afforded to everyone equally, without equivocation or limitation.

So no, I did not march because we lost the election. I don't care that we “lost.” Unlike Trump, I do not see any derivative of the word “lose” as some sort of dirty word or personal slur. That we simply lost the election is not the point. It's not about crying or whining that he won. It's about taking the next step, recognizing that we still have an important role to play.

People may believe Trump will do good things, and I want to make it clear that I’m not out to make sure that Trump fails as president or isn’t allowed to accomplish anything, that he is blocked every single step of the way and crashes and burns just because I “don’t like him.” If there is good legislation that comes from his administration I will cheer it on with the rest of you. But all this talk of “giving him a chance” misses the point. We don’t have to let him pass whatever policies he pleases and only after the fact look at whether people are negatively impacted or hurt by those policies. We can pay attention and oppose any such policies from the outset, and that is what we intend to do. And that is why I marched.

I marched because the highest authority of our nation is not the office of President, but the Constitution. I not only believe in the ideals and virtues proclaimed within that document, I find those sentiments reflected in the teachings of Jesus and other religious figures and traditions the world over that inspire my personal spirituality - that we have a responsibility to care for our planet and those we share it with. I recognize that we are interconnected and interdependent, that what we do impacts others as well as ourselves, and therefore I believe we have the responsibility of trying to limit the harm we cause the environment, our fellow Americans, and our global brothers and sisters. We have an obligation to care for “the least of these,” to act as Samaritans, not Pharisees.

So, finally, I marched because the Jesus upon whose teachings my spiritual identity was developed called his followers to take up their crosses and dare to oppose domination systems that marginalize and oppress, to highlight injustice and juxtapose it with truth and love and light, regardless of the personal consequences.

And I will continue to march, to resist, to speak truth to power. For all those reasons and more, because my personal, political, and spiritual convictions will not allow me to be silent.